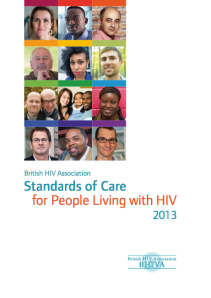 With the news that the British HIV Association has published its new Standards of Care for People Living with HIV 2013, which set out to secure high quality care for people with HIV in the UK, at a time when patient numbers are rising and the NHS changes the way HIV treatment and prevention services will be commissioned and provided.

I am hoping that this will assist all interested in our care here in Northern Ireland to work for improvement of the service. I notice that The Rainbow Project – I hope that it is TRP in Northern Ireland – replied to the consultation that went towards the final document, I trust that Positive Life will work in the future with BHIVA to ensure that the thoughts of its clients and support workers are shown to the rest of the UK.

I have not seen any actual reference to Northern Ireland in the document, there is plenty about England, and some references to Scotland – but the document says the

set of quality standards [are] for the care of people with HIV in the UK.

All too often organisations in England say ‘national’ and mean England and refer to the UK and also mean England – or at best Great Britain. Even if the Standards of Care are not specifically tied into local commissioning and local health plans I am sure that they can be acknowledged and worked towards nonetheless.

I hope that the local Department of Health, the Health Committee up at the Northern Ireland Assembly and especially the Minister of Health, Edwin Poots MLA will take time to read the document. It is available from BHIVA or by clicking on the document’s cover page to the right.

People diagnosed late have a tenfold increased risk of death in the first year after they are diagnosed when compared to those diagnosed with earlier stages of infection according to the Health Protection Agency. Late diagnosis also increases the risk of HIV related ill-health, of HIV being acquired by others, and significantly increases the costs of treatment.

2011 saw the highest ever rate of new HIV diagnoses among Men who have Sex with Men (MSM), a worrying trend that has seen a steady increase since 2007. But HIV is not limited to MSM. New diagnoses of HIV in heterosexuals where the infection was probably acquired in the UK is around 50%, almost double 2002 levels.

The high rate of HIV infection amongst heterosexuals, as well as the persistent trend of late diagnosis is particularly worrying.  Many people are simply not being signposted to take an HIV test.  With a general lack of routine HIV testing being commissioned for general medical admissions and in the general practice setting this is not altogether surprising.  We need a greater emphasis on HIV testing and on all aspects of prevention.

With successful treatment, a person with HIV in the UK can expect a near-normal lifespan. But for that to happen, early diagnosis is vital. Too many people only get tested when their HIV infection is already at an advanced stage, compromising both their own health and that of their partners.

People with HIV are at risk of ‘falling through the gap’ as the bodies responsible for HIV commissioning and prevention in the new NHS systems find their feet.

BHIVA has published these standards in part to ensure that service providers and commissioners are informed about the treatment people with HIV should expect to access.

With this in mind, we have set out a clear description of what constitutes good care for people with HIV, matching the Standards of Care to the NHS outcomes framework.

The new Standards also reflect the growing number of people with HIV who have significant social care needs which can impact upon patients’ clinical care and compromise their well-being.

People with HIV should to be at the heart of treatment and care, and be fully involved in decisions about their care both at an individual level and at structural and policy levels.

This site uses Akismet to reduce spam. Learn how your comment data is processed.

Let’s get talking about mental health